Could This Fridge Be a Canadian’s Best Friend?

11 May Could This Fridge Be a Canadian’s Best Friend?

If you’re backpacking around Europe, then you might want to bring – or make – a good Canadian friend. A quirky new fridge campaign could see you getting close to all the free beer you could possibly want. 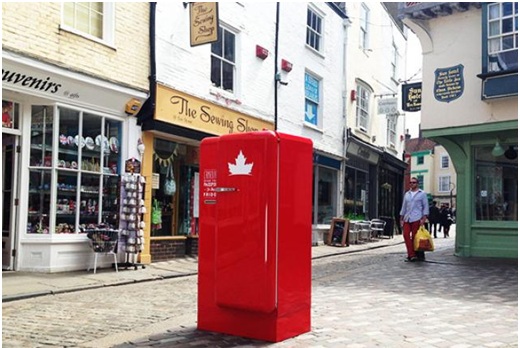 Molson, the Canadian brewer, has installed a series of beer-dispensing fridges across Europe with a twist. Located in big cities, including Brussels and London, the bright red fridges are packed with free beer inside – however, there is a catch. It requires possession of the all-important Canadian maple leaf and an authentic Canadian accent.

Only One Type of Key

This little slice of refreshing heaven may sound wonderful, but the fridges are locked. And they can only be opened by one very special type of key – a Canadian passport. A clever integrated camera inside the fridge will take a photo of the passport and will only unlock if the document is recognised as bearing the official insignia of Canada – the famous maple leaf.

The campaign has received a lot of attention and seen large crowds of participants flocking around the fridges. You can see one of the fridges in action online at youtube.com/watch?v=8gper3YkzMg – and don’t forget to Google the nearest location if you’re inclined to get involved.

Singing for Your Beer?

An earlier advertising campaign from the same company saw beer-packed fridges being installed in Canadian cities, but this time there was another way to get them open. Successful beer winners had to sing the Canadian national anthem. To celebrate Canada Day, flocks of locals turned up to try to sing the door open but only succeeded if their tone and delivery were spot on.

Similar fridges were installed at the Sochi Winter Olympics, and they caused quite a stir among all those who saw them. It helped too that the fridge models themselves were beautiful and well designed.

It’s a great advertising campaign, and it won an award for its innovative nature. The agency behind it have promised more fridges of the same ilk to follow. Will commercial refrigeration firms be inclined to offer something similar? Certainly, there is an ever-increasing number of quirky, innovative and high-end fridges on the market, from domestic to commercial solutions. You can find a huge range of options for commercial refrigeration by Fridge Freezer Direct.

You can find great inspiration online when it comes to fridges from some of the top reviews. A beer fridge is also a great way to keep your favourite drink cool if you’re planning a party or if you have space in your kitchen, cellar or utility room for a standalone beer storage facility – some bedrooms and offices have also been known to boast one.

In the meantime, if you’re in possession of that all-important Canadian passport and looking to travel across Europe any time soon, keep your eye out for a beautiful big red fridge promising instant free refreshment inside.