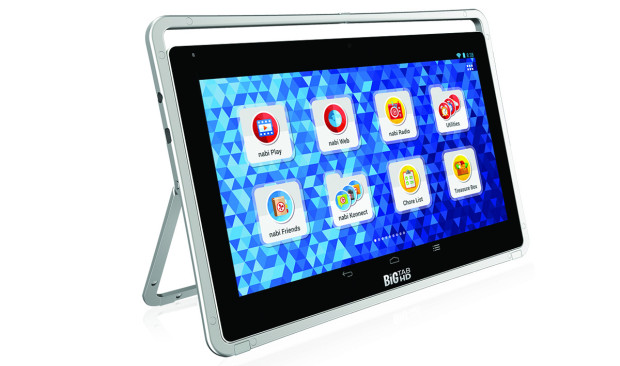 Posted at 11:26h in Latest Gadget by Alex 0 Comments
0 Likes

Fuhu decided to put on the market Nabi Big Tab, a tablet giant 24 “designed for children. You can play and socialize in a group, and is very intelligent idea.

Probably the Fuhu Nabi Big Tab is exactly the tablet for children that the market did not know he will. For one thing, it is a device almost surreal: 24 inch tablet does not seem a good idea, this is the screen of a PC All-In-One, not an Android device – yet here the Google operating system does not feel at all uncomfortable. 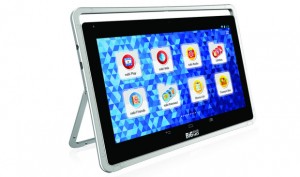 The display is a touchscreen fifteen points of contact with a 1080p resolution, which means that we are faced with a monitor perfect for watching movies and cartoons – but we are expecting a baby put your hands on and the TV will probably l least of his worries. In fact, do not use just one child, but two, or use it with him, because this is precisely the idea. It is a tablet collective, social, perfect for interactive multiplayer games.

Spending time with your infant (we speak of children aged two to eight years, probably) and play games, it is quite common nowadays. And after all, why not? Our generation has grown up with video games and, unlike our parents, we know its strengths and weaknesses.

A tablet-sized works surprisingly well in the hands of an expert sucking, but beware, they artificially limit the use with excessive severity, risks becoming an obsession and a sort of “forbidden fruit”. And even if we leave some freedom of use, a tablet is small and only one child can play at a time, creating dissension and discord among brothers. A “mega tablet” instead becomes a group experience, social, and a great way to share time with their children.

Fuhu, the creators of Nabu Big Tab, intend to turn it into a useful appliance to all families, even those with teenage children. So with the passing of the months and the launch of the product will be expected versions of popular boardgame and other pastimes for everyone, and not just for the little ones. I can not say that the idea is bad: a Nabu Big Tab costs $ 550, all in all a decent price for what is basically a display with a built-in tablet. If he can create a good ecosystem deserves its success.