We drive alone. Yes, when we drive our car, our car as usual, we drive alone. Except in rare cases, we’re not alone in the streets or in the roads we drive, just that the responsibility of driving the car is ours and only ours, nobody helps and we have to be as attentive and focused as possible driving to avoid a mishap. 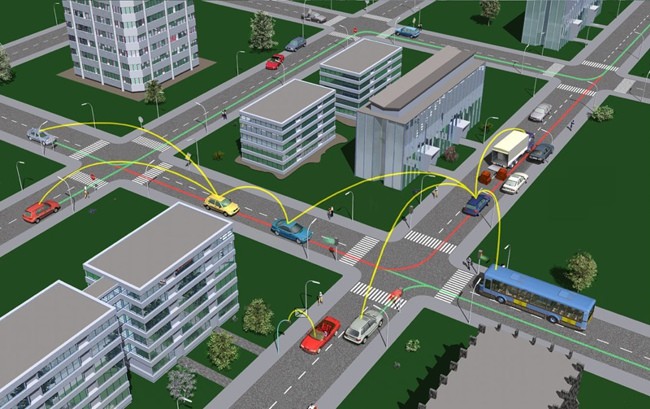 But a driver, as a human being it is not infallible, it can not see everything, be distracted or can make a mistake, and among other things, why there are accidents. No wonder the main cause of accidents is the human factor, more than three out of four accidents. Can technology help reduce the number of accidents? Yes, you can.

Believe it or not, from a little over ten years ago he began to research in a field called V2V or C2C. This stands for Vehicle To Vehicle or Car To Car, and you can also find similar V2I or C2I by Vehicle or Car To To Infrastructure Infrastructure. If you read also somewhere V2X or C2X, do not panic, they are also talking about it.

There may be several names, but basically we are referring to the same thing: a system for wireless short-range communication, like WiFi, so we understand, and with a range that can vary, but is usually at most 1000 meters if there are many obstacles, but typically will be about 300 m.

This reflects other acronyms, DSRC, for Dedicated short-range communications. Normally a band of 5.8 or 5.9 GHz is used, with a bandwidth of about 75 MHz. In other words, we speak of an ad hoc network, which is formed by “connecting” one car to another, and that to another, and another, and so on. This can also be supplemented with a mobile internet connection high speed LTE for other data (e.g. weather information) and system redundancy and reliability.

In the United States, Europe and Japan are investigating and developing this technology. In Germany for example has been tested in real conditions . For the moment though very similar, does not end having a single standard for everyone, as a matter of frequencies are not directly compatible systems from one region to another, which a priori is not too worrying as a car manufactured not normally circulated by the US, Japan or the European market, and vice versa.

And what good is that?

Well the traffic safety authorities, manufacturers of components and electronics and automobile manufacturers believe that these systems can bring major benefits of traffic safety. The idea is that V2V systems would be talking about which vehicles are able to communicate and send some data to each other, always in close proximity.

The data sent so far are not many, we discuss the exact position, speed and trajectory, but could be extended to more data. Thus our car is telling the other vehicles that are close to us where it is, where it is already moving at what speed and in the same way that data is getting from other vehicles. The car also carries a GPS tracking module, in order to clarify their position.

Besides this information, the car has to equip a processing system that allows it to discern which affect us and what is not. The aim is that the driver no longer drive alone, and not exclusively dependent himself and what he sees, and also can avoid distractions or lack of visibility. With these systems would be like having a co-pilot goatee us useful information in a timely manner.

Our car will say “here I am” to others

Let’s take an example to see much clearer. We drive our car and approaching a junction with a not very good visibility, although we reach not see it, our car has received the signal from another car approaching from the cross road, our right computer system calculated the paths will cross, which is safe, and skip a message box advertisements instruments thereof.

In addition to cross traffic, the example we have just seen, can also be used to warn of a car that is faulty and stopped below, to indicate that a car is braking and no risk of scope, even if still there is no direct vision with him, anticipating valuable seconds, or to warn a vehicle is changing lanes at a time or to alert us that there is a vehicle in the blind spot (the blind spot) than mirrors.

Think even pedestrians could also lead marking systems with broadcast wireless signals, either with a built in certain clothing, like a coat or jacket, or whether in a smart device such as a smartphone or smartwatch system and that our car would also like to know if there is a pedestrian started to cross the street below, even if it was partially obscured by a large vehicle that does not let us see it.

The infrastructure will also communicate with cars

And systems are also V2V V2I systems. That is, just as there is wireless communication between vehicles, I would have the elements of infrastructural. For example with traffic lights so you know when you are going to put in red, and not continue to accelerate over the account, or when are going to get green, not too slow, and also to know if there is a traffic jam later, to warn the driver that comes on a street in the opposite direction, or to receive the vehicle speed limit actual maximum that stretch.

All this can be combined with other forms of aid and security that can mount the drive, and will gradually getting cheaper, popularized and generalized, such as control systems adaptive cruise speed and automatic braking systems among others.

Thus the information handled by the “brain” of the system V2V car, it can reach react automatically if the driver does not: for example, the crossing could get to stop by itself, to avoid the accident with that car coming, or highway speed control speed directly take each section automatically, to give a couple of examples.

If you know in real time how is the traffic situation in each place, the traffic manager can send some information to each car to try to better manage the movement, for example, may indicate that an alternative route is taken to avoid even more certain entrance to the city. There are many possibilities.

In the US NHTSA, National Highway Traffic Safety Administration, the agency that handles issues of traffic and car safety, you are very determined to soon be implanted as mandatory for new vehicles come already with these factory installed systems.