Have You Heard of Mac’s Universal Control? Here is What It Means! 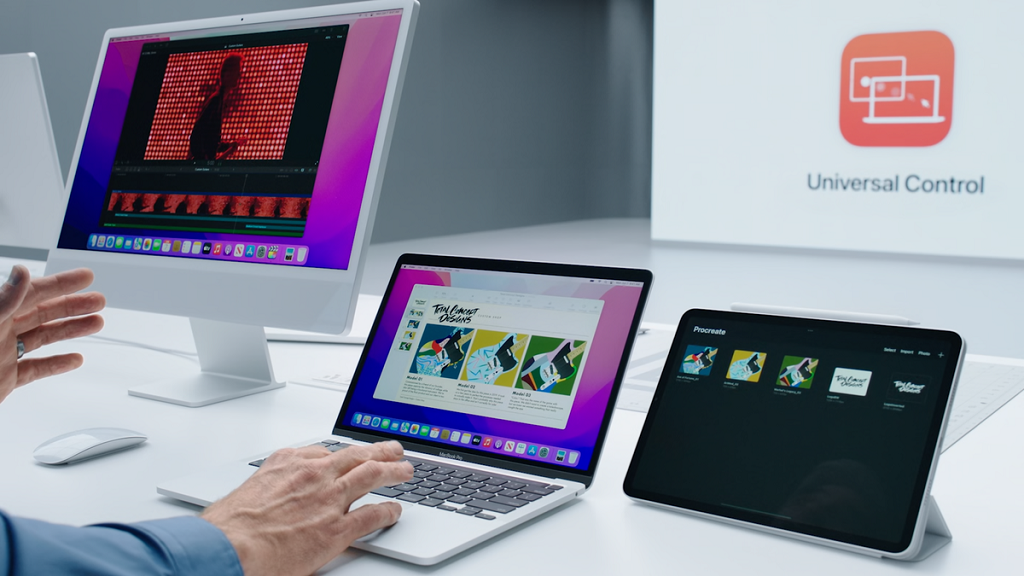 20 Jul Have You Heard of Mac’s Universal Control? Here is What It Means!

Apple fans know what we mean when we say that there is no end to the innovations of Mac devices. Using an Apple device can be an absolute pleasure to use when the OS runs smoothly and your device is loaded with amazing features to make your user experience better than ever.

Keeping up with the latest Mac OS updates is a sure-shot way to ensure that your device is running smoothly and has resolved previous bugs or glitches.

Today, we’re going to discuss one of the most exciting features everyone is talking about: Mac’s Universal Control. Here is all you need to know about the upcoming feature.

What is the Universal Control Feature?

Universal Control is  Apple’s latest wireless tech spec which will be available for iPad and Mac PCs which will enable using multiple devices with the same mouse and keyboard.  Basically, you can link devices and operate them using your main Mac device.  Universal Control works along the lines of using two monitors, apart from the fact that users can collaborate on two or more individual Mac devices that can be connected so the user can control documents, folders, files, and complete other tasks.

The list above is pretty extensive, so the chances of your Mac and iPad supporting Universal Control are very likely. However, there are some more requirements.

How Many Devices Can Be Connected With This Feature?

Universal Control allows a user to connect up to three devices at a single go. The choice of connected devices can be one Mac with two iPads or two Mac devices with one iPad. An important note to make is that if you own several devices that can support the universal Control feature, the Mac or iPad will connect to the device you used recently by default, so you will have to add the device you want to connect to instead of the default.

How Does Universal Control Work?

Just like Apple’s traditional minimalist approach, Universal Control needs nothing extra from the users such as an add-on purchase. All you need to do is keep your Mac devices close to each other so that they can connect automatically. Once paired, you can count on these devices to connect to each other automatically by default unless you choose not to.

When you add multiple devices in proximity to each other, their Bluetooth gets activated for the OS’s continuity. Once paired, move the Mack cursor a bit beyond the edge of your screen, either to the left or right, and your system will assume that you want to activate Universal Control by triggering a connection. A small bar appears on your iPad to help you align the Mac cursor with the device to start using it. It may sound intricate but takes no more than a few seconds!

When Will Universal Control Be Available To All?

Even though Universal Control is a great feature, people will need to wait before they get their hands on it. Apple hasn’t released when it would be made available. Moreover, it is not even available in the first beta model for testing on the Mac Monterey and iOS15.

Using the Universal Control feature comes with a well-deserved hype since it streamlines the way you work with multiple Mac devices. Available across several models of iPads and Mac PCs or MacBooks, you can manage multiple devices at the same time without having lengthy transfer processes now, thanks to Apple’s usual genius innovations.