The best fog machine to succeed at any party 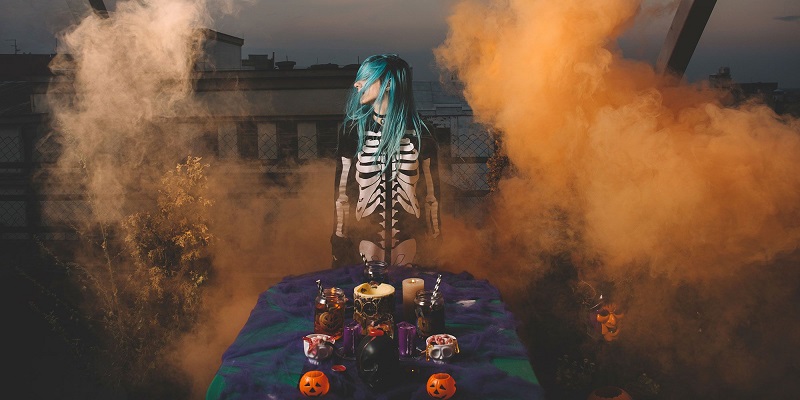 02 Jun The best fog machine to succeed at any party

Posted at 06:20h in Electronic Gadget by James 0 Comments
0 Likes

Fog machines are common devices at parties, celebrations, or shows. This wide utility makes it, depending on its technical possibilities, required for events as diverse as birthdays, Halloween parties, school functions, or large concerts.

As is evident, this is not an article essentially oriented towards the domestic sphere. But it is an option to take into account for, in addition to leisure, improving small functions in schools. Video clips that are so easy to do today through smartphones, amateur theater pieces, or concerts in small venues, to give a few examples.

With the right lights and this machine, also called a fog machine, and performance will be noticeably enhanced. Nowadays, it will help a lot to decide that your prices are very cheap.

Of those analyzed here, we place in the first place a basic model of seven colors from the Theefun brand due to its diversity of color possibilities, its easy portability, and its economical price.

We have only pointed out its playful side, but it also has practical applications in the industry. Such as visualizing air flows in wind tunnels or in checking air conditioning filters.

You always have to look for the greatest possible savings on quality products. And for this, you can also go to the best offers prior to Black Friday.

What is it and how it works

It is defined as a device that generates a dense vapor similar to fog or mist. In general, it produces fog by vaporizing water mixed with a fluid-based on glycol or glycerol, a widely used liquid is glycerin.

To generate the fog, the fluid is injected on a hot base that causes it to evaporate quickly. When the resulting vapor comes into contact with cold outside air, artificial fog is generated.

Glycerol has been listed for human consumption since 1959 and is even a widely used component today in the food sector. Therefore, you can have peace of mind.

What types are there

Fog: The most conventional. Its operation has already been explained in the previous section.

Hazer: They produce a much finer smoke thanks to the use of a special liquid.

Fazer: Quite the opposite. Also through the use of different chemical liquids, it generates denser fog than normal.

-More than 2000W: For outdoor use or large spaces.

How they are controlled

– DMX Control:  The most professional system and the one used in large events. It is a table indicated for installations where light effects are connected and can be synchronized with other effects.

– Timer:  Simple controls to use since the interval and intensity are adjusted for the moment you want.

– Control: Either wired or wireless (much more comfortable, obviously)

What to keep in mind

– Size and weight:  Always recurring requirements in this type of electronic device. As is overwhelming logic, nothing like a machine for a homemade Halloween party with one used at a concert in a football stadium. The lightness and dimension will be in line with the type of use and its portability as well. If they are already mid-range, it will be necessary to think about a specific means of transport due to the weight.

– Controls:  Also already treated. The wireless controller has the obvious advantage of being able to move with it. But also more or less liven up the party. That is, in a disco, the Dj can generate more or less fog during a musical theme and thus give it more or less emphasis.

– Power:  Having previously established the parameters in watts and the appropriate places, add that, of course. The higher the power the less it takes to generate the smoke. But that this specific fact will not compensate if it is to be used in small premises.

– Durability:  It is a product that has to last because its purchase is not usual. Even if it is for minor functions, it is recommended that it have good materials, that it is resistant. And that it has a long life, even if it is for a little more money.

– Effects: Factor closely linked to the types of machines already explained: normal, hazer, which generates finer mist, or fazer which produces a denser mist depending on the fluids supplied.

– Propagation: Well, the distance of propagation of the fog depends, of course, on the power. Between two and eight meters we will locate the different models from less to more watts.

– Noise: Silence is not one of its qualities, but it will also be in line with the size.

– Periodic cleaning is recommended, especially if it is stored and is not going to be used for a considerable period of time.

– The process is quite simple since you only have to replace the liquid that is injected to generate the mist with one intended for cleaning. When expelled, it leaves the interior clean and prevents obstructions.

– As more homemade advice, the mixture of distilled water and vinegar is good for cleaning and removing obstructions in the boiler, if any.

To succeed at domestic parties: Theefun 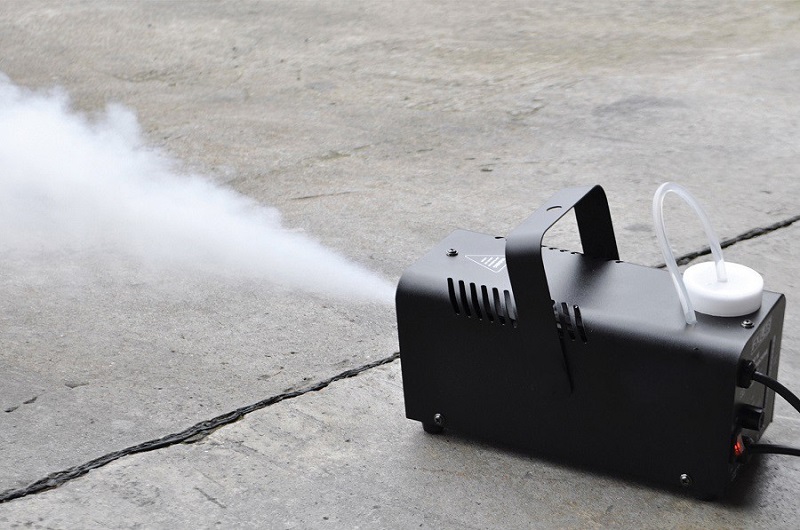 We have opted in the first place for the more domestic option in machines that are not designed for the home. This one, however, can brilliantly enhance any party and more so if there are little ones in it.

For example, it is ideal to succeed in the already approaching dates of Halloween at any party simulating fog or fog from pans or other accessories.

Of course, it gives more of itself within its limited power since it is also useful for small performances or concerts thanks in large part to the possibility of emitting six-color smoke due to its set of filters.

It is also a more than the interesting alternative for leisure venues with a conventional surface that organizes festive events.

As complementary but important aspects when it comes to the domestic sphere, it is very portable, light (less than two kilos), and compact. Therefore, easy to store in any space.

To all this, it adds a very appreciable density in the fog and a very economical price (remember here that the liquid is separate) that invites you to acquire it, although it is going to be used very sporadically since it is very striking. 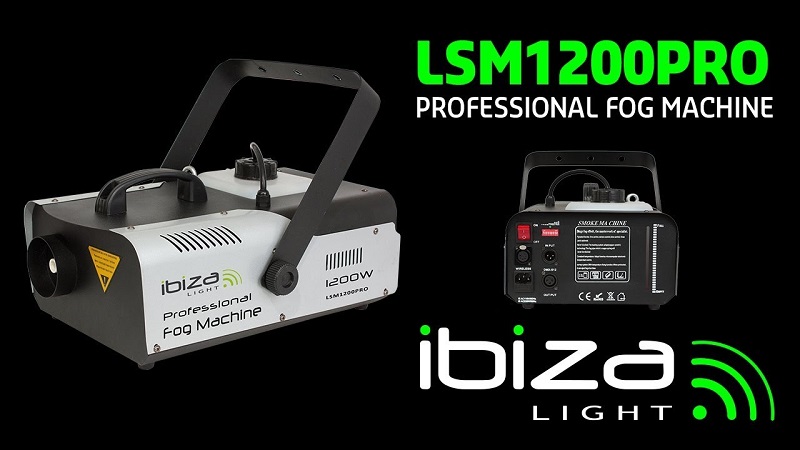 A versatile alternative that can be used without problem in the professional field due to its high power (1200W which, to get an idea, is triple the previous one) for a price that can be considered affordable in this range.

High jet intensity is evidence that it can leave a room of about 40 m2 full of fog in less than half a minute. It has the professional DMX control already referred to through a channel and also wireless control.

For the functions it fulfills, it is an optimal investment. For example, it is ideal for small theater companies or schools. In the field of nightlife, it also has an outlet in bars with music or small stages.

It has a size and weight (just over five kilos) excellent to be transported and the noise it makes is quite bearable. It already exceeds the benefits for a home party, but if it is worn it will look great. 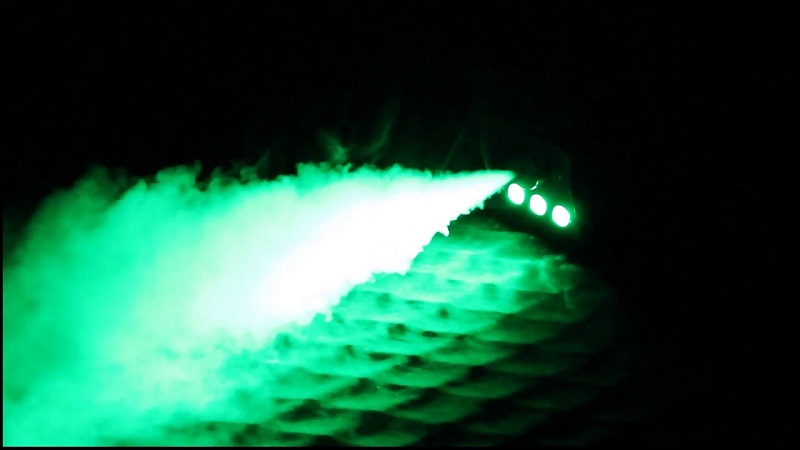 Of considerable power and good price. With its 900W it is able to fulfill with a note in many different areas.

For example, more than enough for private parties. And more than correct in music venues or small and even medium-sized shows.

This power leads it to reach a high spraying distance since it is over six meters and is capable of emitting fog for one minute continuously. The liquid capacity is one liter.

Very appreciable benefits that are enhanced with a very economical price for what it offers.

It has a remote control and can be activated from a long distance. Since it has a radius of 50 meters, according to the manufacturer. 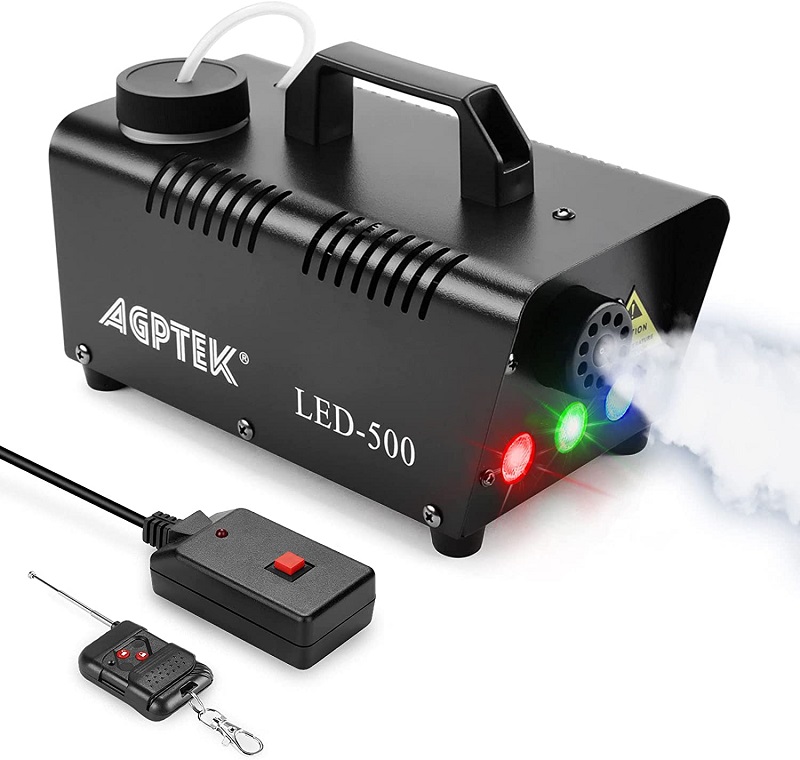 Undoubtedly, the asset of this model is it’s wide chromatic and effects catalog without excessively suffering a fairly affordable price.

No less than 13 colors can tint the smoke in addition to other light effects such as flash or fading.

With this background, it is obvious to point out that this machine can be the main protagonist in any party. And make it something very different from the conventional ones.

It is not left alone in lighting technology as it is a very robust iron and aluminum machine that moves very well thanks to its large handle. 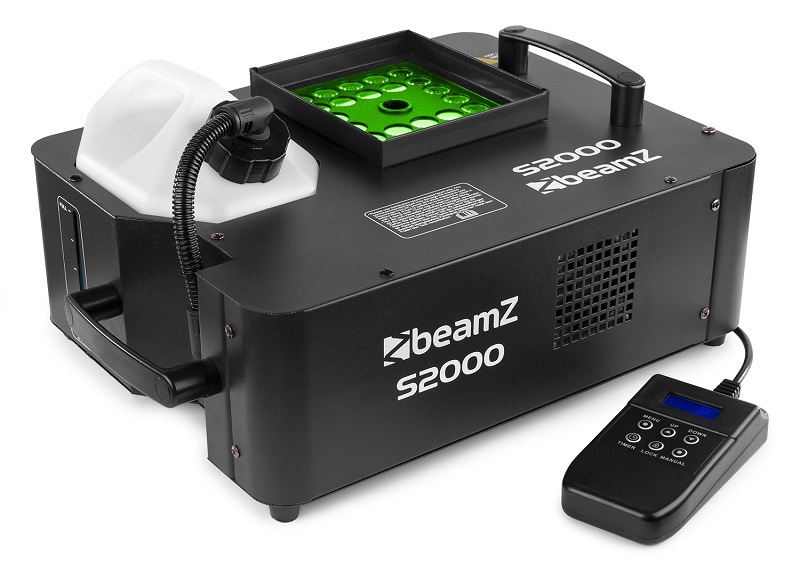 A model that is economical in the range of professional machines that already move on forks that have nothing to do with homemade festive options.

Great power (2000W) for an already renowned and large capacity clubbing device that, however, has a fairly bearable weight (about eight kilos).

Optimal load capacity. It is the ideal complement to enhance the aesthetics of the DJ’s work while handling the tables.