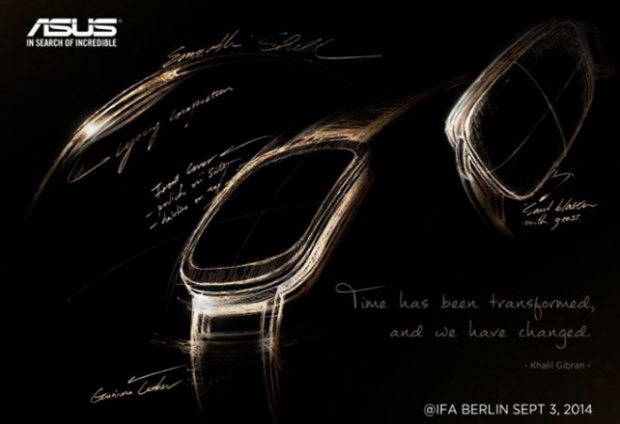 Posted at 10:43h in Latest Gadget by Alex 0 Comments
0 Likes

Asus anticipates its press conference at IFA in Berlin with a new teaser. The sketches show the possible promotional represented in the design of the smartwatch with curved display.

The new presentations, the outputs and the various items on smartwatch make up what is undoubtedly one of the hottest topics this year. It is therefore natural to think that during the edition of 2014 IFA Berlin the various types of wearable gadgets, including precisely the smartwatch, will have a rather important role and prominent. 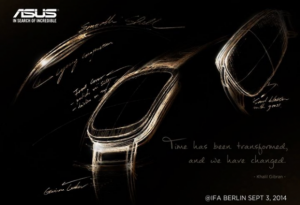 Of future arrivals we have several examples: Sony could present the third generation of its smartwatch accompanying the various Xperia Z3 and Z3 Tablet Compact. LG on the other hand seems to be ready to revise their concept of clock-smart, choosing for his LG G R Watch a round design comparable to that of the Motorola Moto 360 that will be exhibited in Chicago in the stress days.

The G Watch R will make use of the Google operating system, Android smartwatch Wear as well as the Asus to arrive at the fair in Berlin has been confirmed several times in recent days. The Taiwanese manufacturer anticipates to turn the event with a teaser that gives you an idea of ​​how it will look at the clock.

No body round to the smartwatch Asus but the frame keeps rounded lines and seems especially equipped with a curved display, other technical features of which much has been said in the course of 2014.

Obviously the teaser leaves no room for technical details but some leak allude to the presence of a front camera perfect for selfie. According to information gathered so far Asus plans to sell its smartwatch at a price that settles between $ 99 and $ 150.

We’ll find out more about it on September 3, the date of the press conference called by the Taiwanese company.